Watch the Launch Event: Mobilizing Men as Partners for Women, Peace and Security

On Wednesday, March 20th, Our Secure Future and International Peace Institute co-hosted the launch of Mobilizing Men as Partners for Women, Peace and Security. Led by OSF Fellow Ambassador Don Steinberg, the Partners Initiative brings together individuals from the defense, diplomacy, development, civil society, and corporate spheres, all of whom are dedicated to advancing the Women, Peace and Security (WPS) agenda. The group aims to ally with, listen to, speak with (not for), and open doors for women’s groups and individuals working to advance gender equality within international peace and security efforts.

During the panel, Karin Landgren, the Executive Director of Security Council Report and the first woman to have led three United Nations peace operations, spoke about her 35 years of experience at the UN working with men and how to make that partnership more effective in the future.

“I’m convinced that men hear other men more effectively than they hear women,” she said. “Like it or not, the world over, there seems to be widespread male discounting of truth spoken in a female voice. One way forward is more female voices, but for now it galls me, if we want effective communication and outreach, there need to be more male voices not simply relating the evidence but persuading others at a more visceral level of the value of women holding power.”

Sounding a similar note was Ana Maria Menéndez, Senior Adviser to the UN Secretary-General on Policy, who said, “Male allies use their power to provide a platform to amplify the voices of women.” She said the broad goal was to have “more women leading their communities, changing the face of the security sector and having an equal say in how we reconstruct societies, how we heal from conflict, and how we prevent it in the first place.” She added: “We’re not even close.”

IPI Senior Fellow and panel Moderator Sarah Taylor said, “If we are going to move forward on the core of the women, peace and security agenda and everything that means, on ensuring that this is recognized and implemented as a universal agenda, then these difficult tasks are necessary tasks, tasks to be done in a considered, even humble, and certainly in a feminist way.”

Fatima Kadhim Al-Bahadly, Director of the Al-Firdaws Society in Basra, Iraq, spoke of how she worked to deradicalize young boys in her country through social cohesion campaigns on peace and coexistence and warned of the consequences of inaction. “Ignoring women and children will expand the base of extremism and violence all over again and will help establish new extremist organizations,” she said.

Donald Steinberg, the executive director of Mobilizing Men as Partners for Women, Peace and Security, said the failure to involve women at all levels of leadership constituted “an emergency. And it requires nothing less than a wholesale reordering of our male-dominated global security priorities.  There has been impressive progress on international norms and practices…but our success can’t be measured on how many Security Council resolutions we pass, how many national action plans we adopt, or even now many women have served in peace processes. Instead our success will be measured by whether these peace processes can actually bring just and lasting ends to conflict.

Several speakers reported instances of “push back” from men resisting advances by women. “If I ever broached the idea of quotas for women, as I sometimes did,” said Ms. Landgren “even my extremely reasonable male friends would—metaphorically speaking—reach for their revolvers and start to talk about ‘lowering standards,’ as if current selection processes for male leaders are all about high standards,” she remarked, in a comment that drew knowing laughter.

She acknowledged the fear that men, if given the opportunity, might try to wrest leadership from women and the reality that “women can be reluctant to propel themselves to front lines.” But she asserted: “We need both men and women to pull other women into leadership roles.”

Mirsad “Miki” Jacevic, Vice Chair of the Institute for Inclusive Security, expressed impatience with those calling for more study of the issue. “The news I have for those who say we need more research, we’ve researched enough. We have enough case studies and data. We just need to now translate this into making this happen. I recognize the push back, but I think we need to recognize the enormous power of the potential that women have from letting war take even more lives.”

Noting that gender inequality impacts us all negatively, IPI Vice President Adam Lupel cited the findings of research by Valerie M. Hudson of the Bush School of Government and Public Service at Texas A&M University that showed that the best predictor of a country’s peacefulness is not its economic status, nor its level of democracy nor its religious or ethnic composition, but how well its women are treated. “It’s not just about the rights of women,” he said, “but a more peaceful and prosperous world for everyone.”

Sahana Dharmapuri, Director of Our Secure Future, said that to further her organization’s mission of strengthening the Women, Peace and Security movement, she was looking for strategic entry points. “There can be nothing more strategic than leveraging the principles of partnership and equality,” she said.

Anwarul K. Chowdhury, a former UN Undersecretary-General and High Representative, alluded to the necessity of including women in furthering the peace agenda. “Half of humanity bring a new breadth, quality, and balance of vision to our common efforts to move away from the cult of war towards the culture of peace,” he said. “Women’s equality makes our planet safe and secure…If we are serious about peace, we must take women seriously.”

Click the photos below for Ambassador Chowdhury and Ambassador Steinberg's full remarks. 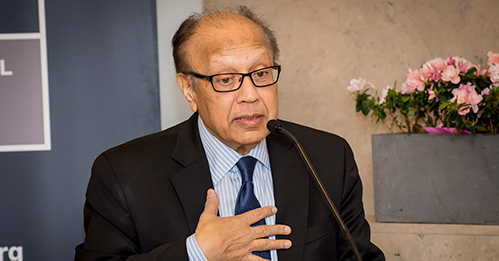 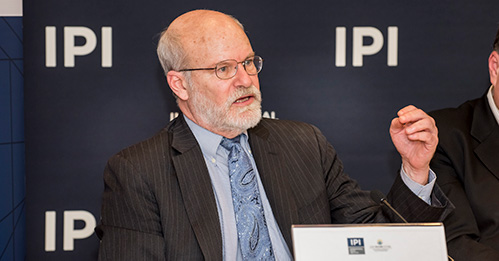 Return To Mobilizing Men As Partners Project
Follow Us: