2020, what a year! At the end of an unprecedented year full of global health, personal and economic challenges, OSF wanted to express our gratitude for your engagement and support of our work. Throughout the pandemic it became clear how critical the Women, Peace and Security (WPS) agenda’s goals are for both international and national security.

It is easy to be discouraged given the staggering changes to our daily lives and the mental and physical toll the COVID-19 pandemic has had around the world. Additionally, the long overdue global reckoning with race this past June and July exposed the systemic bias baked into our institutions. Despite these challenges, the WPS community rallied and continued to promote the Women, Peace and Security agenda to give women an equal voice.

We are proud of the work we were able to accomplish this year. From opening the office in Washington, D.C., to the launch of the Women, Peace and Security Congressional Caucus, to technical assistance consultations and virtual convenings, and wrapping it up briefing the Biden transition team, it has been a busy year at Our Secure Future! Check out some of the highlights from this year below. We look forward to working with our partners to continue strengthening the Women, Peace and Security agenda in 2021.

We are so excited that the WPS Congressional Caucus was launched this spring! The newly established WPS Caucus seeks to ensure that the WPS goals stated in UNSCR 1325 and in the Women, Peace and Security Act are actively considered national security and foreign policy priorities for the United States in bilateral and multilateral relations, discussions, and agreements.

We hosted three NGO consultations with the Bureau of Conflict and Stabilization Operations of the U.S. Department of State on the implementation of the Global Fragility Act (GFA) and how to integrate gender with those strategies and plans. Policy coherence for all peace and security legislation is crucial to improve our outcomes. Check out the synthesis of the consultations in our policy brief we wrote with the Alliance for Peacebuilding.

COVID-19 is a national security threat of a different kind. One that made us realize why we must reexamine how to define security. It is time for the US government to look to lessons from women’s organizations within and outside of our country to implement policies and practices that will lead to more efficient preparedness, response, and recovery efforts, and build more resilient communities. Our policy brief, Security for All, offers a set of WPS-grounded analyses and recommendations to the US Congress to support a more effective pandemic response and recovery for all American people.

Two decades of experience on the ground and research show that when applied, the WPS agenda increases the effectiveness of programs, policies, and individual actors--male and female. Actors in the maritime domain rarely incorporate a gender perspective into their work because maritime issues have traditionally been considered gender-neutral. More must be done to increase women’s participation in the maritime sector, from coastal welfare to the Blue Economy in order to reap the benefits of the Women, Peace and Security (WPS) agenda. Our paper, Charting a New Course, aims to provide a baseline examination of the intersection between the WPS agenda and the wider context of maritime security. 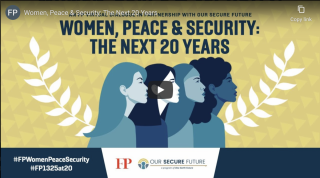 In October, we went big with a collaboration with Foreign Policy Magazine, convening exceptional leaders from across security, tech, and government for a forward-looking conversation illuminating the WPS policy framework. As we marked the 20th anniversary of the UN Security Council’s landmark resolution (1325) on Women, Peace & Security, the world is facing a new set of security challenges—including new technology, climate change, global health threats, and political volatility—never envisioned 20 years ago.

During our dialogue, we discussed effective ways to apply the WPS lens toward a widespread gender perspective mandate and how it can help us reframe the narrative around security. If you missed it, check out the recording to learn about strategic commitments and practical ways in which institutions can increase women’s participation across the board – and the gendered pressures we must address – to enhance global security, peace and stability. 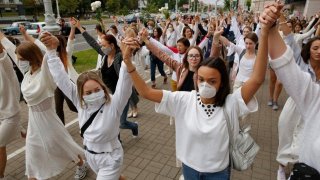 We were so excited to host multiple events with the McCain Institute this year! Two highlights were The Role of Women in Belarus and How Women in Sudan are Charting a New Course.

Longtime President Aleksandr G. Lukashenko retained power, but the protests against him were the largest in the country’s history. They were met with violent repression and widespread arrests. One important aspect of the current pro-democracy demonstrations is that women have been at the forefront of the political opposition and leading the protests in the streets. Thousands of women organized to create human “Solidarity Chains” which have been replicated across Europe.

Check out the recording to hear Natalia Arno, Melinda Haring, Olena Suslova and Olga Karatch discuss how women shaped the revolution, how the international community and U.S. policy can support their efforts, and lessons learned from other regional WPS efforts for Belarus.

In 2019, the worsening economic conditions sparked massive and prolonged street protests that eventually led to Omar al-Bashir’s removal. It was estimated that over 70% of demonstrators were women with many people calling it the “women’s revolution.”

If you missed DAS Makila James, Huda Shafig, and Susan Stigant discuss how women shaped the revolution, how they are continuing to fight for a more inclusive and prosperous Sudan, and how the international community can support these efforts. Watch the discussion here!

The collective voice of men as advocates for gender equality has been largely absent in the peace and security space. While individual men have expressed supportive views, and some organizations have been formed in related areas, their voices have largely been absent even though they make up the majority of leadership positions in key institutions and structures.

That’s why we were so excited to cohost Gender Equality in Peace & Security: The Role of Male Allies with the Georgetown Institute for WPS. Distinguished male allies across defense, diplomacy, and civil society discussed men’s role in advancing gender equality in peace and security. They posed strategies for engaging men and boys at all levels of decision-making, overcoming institutional barriers, and changing gender norms. Check out the recording here!

Additionally, we are so excited about our collaboration with Georgetown University’s Institute for Women, Peace and Security (GIWPS) and the second season of Seeking Peace! It’s a multilingual season to spotlight women’s fight for peace and justice in their communities, from Afghanistan to Colombia to the United States. There are just a few episodes left this season, you can listen to Seeking Peace via Apple Podcasts, Stitcher, Spotify, Google Play or GIWPS’ website.

Mobilizing Men as Partners for Women, Peace and Security

The 2020 Distinguished Partners for Women, Peace and Security Award to grassroots women-led groups from Afghanistan, Guatemala, Jordan, Lebanon, Nepal and Nigeria countries in honor of Maeve Kennedy Townsend McKean, who passed away on April 3, 2020, along with her son, Gideon.

Men still hold many of the positions of power within the peace and security architecture, but they must become allies in pushing this agenda forward. To highlight this work and give examples of how men can be allies to the WPS agenda, Mobilizing Men as Partners for WPS has begun a series of interviews with prominent male allies. The series is ongoing with the first of the series including interviews with: